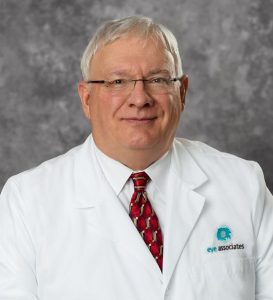 Dr. Eagleson earned a B.S. in Optometry and was awarded a Doctor of Optometry degree from Indiana University. He served a Navy commission from 1974 to 1976 before becoming a Fellow of the American Academy of Optometry. Since, he has accumulated more than 40 years of experience in optometry. Since 1977, Dr. Eagleson has been a member of the Rotary Club, of which he was also a former president. He currently serves North United Methodist as church treasurer and enjoys spending time with his two daughters and three grandchildren.

Please help us spread the word about the quality eye care you received from Eye Associates and John Eagleson, OD by clicking on the link below: